Limerick Diocesan Synod will help reinvigorate, reimagine and create a Church that serves the people better 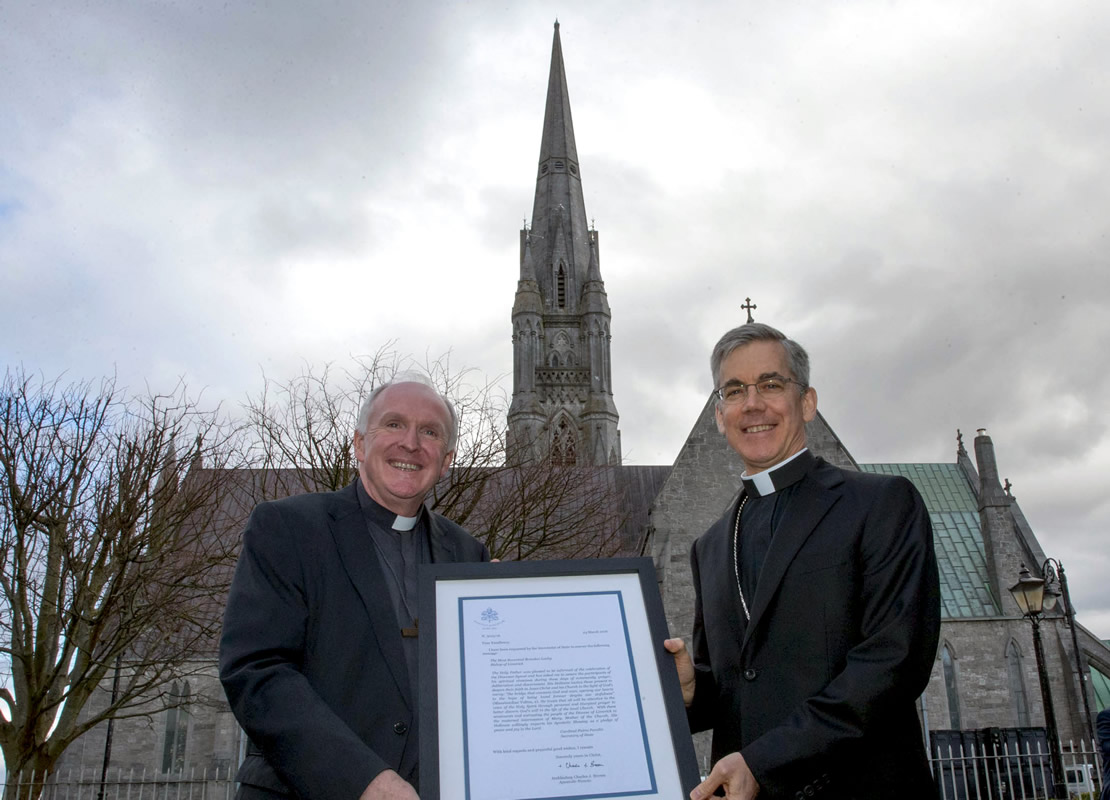 Monday, 04 April 2016:  An official blessing from Pope Francis was today presented to the Diocese of Limerick to support its deliberations at the first Synod in Ireland for half a century this weekend.

Pope Francis’ blessing was handed over to Bishop of Limerick Brendan Leahy, who convoked the Synod in late 2014, by the Papal Nuncio Most Rev Charles John Brown on a visit to Limerick four days out from the commencement of the Synod.

Synod Week, which officially commenced yesterday, will involve a range of celebrations and events across the Diocese but will culminate in the key gathering of almost 400 delegates, three quarters of them lay, at Mary Immaculate College, Limerick from Friday through to Sunday.

The three-day gathering will see delegates consider over 100 proposals across six separate themes to help map out the future of the Church and how it serves in Limerick.  The proposals and themes have emerged out of a lengthy and detailed engagement with over 5,000 people covering all demographics from across the diocese in 2015.

Bishop Leahy mentioned the Synod to Pope Francis during a brief audience with the Pope in Rome two weeks ago and said that the Papal blessing is a wonderfully encouraging acknowledgement of the importance of the work that will take place during the Synod.

“There could not have been a better start for us to Synod Week than to receive this Papal Blessing. I took the opportunity when I met Pope Francis two weeks ago to tell him of the Synod and, as in the previous occasions when I referenced Limerick to him, his eyes lit up. It’s clear that he has an affinity for Limerick.

“It’s an honour to have the Papal Nuncio with us in Limerick again this week but that he has come bearing such a gift as an Apostolic Blessing from His Holiness ahead of our Synod will really imbue a greater sense of purpose and vigour in all of us as we approach this hugely important gathering.

“Save for Pope John Paul II’s visit to Limerick in 1979, this is probably the most important moment for the Church in this diocese since the last Synod, all of 80 years ago.”

Looking ahead to the Synod, he said “We are at a really important juncture in the lifetime of the Church. There continues to be incredible work done but we have also come through turbulent times. There are challenges ahead but we will embrace them as opportunities. We have to confront the decline in vocations, for example, but this issue also makes us see the Church as a people, with clergy and laity working side by side to ensure the Church delivers spiritually, pastorally and, indeed, socially in the way it can.

“This is exactly why I convoked the Synod in late 2014.  Since then we have been through an incredibly detailed engagement with the public.  We have communicated with 5,000 people across the diocese and essentially asked them how we can best serve them in the years ahead.  The 100 proposals that have emerged from this process and will be considered at the weekend will, therefore, help shape our Church here in Limerick into the future.  It is a thoroughly representative gathering of our Church in Limerick to consider how we move on from here, reinvigorate, reimagine and create a better Church in the Diocese.

“I look forward to the outcome of those deliberations, the proposals for change that will come to me, and all the more so that we have Pope Francis personal pledge of his spiritual support for us at this pivotal time.”

The Papal Blessing was sent by Vatican Secretary of State Cardinal Pietro Parolin on behalf of the Holy Father and read:

“The Holy Father was pleased to be informed of the celebration of the Diocesan Synod and has asked me to assure the participants of his spiritual closeness during these days of community prayer, deliberation and

discernment. His Holiness invites those present to deepen their faith in Jesus Christ and his Church in the light of God’s mercy: “the bridge that connects God and man, opening hearts to the hope of being loved forever despite our sinfulness” (Misericordiae Vultus, 2). He trusts that all will be attentive to the voice of the Holy Spirit through personal and liturgical prayer to better discern God’s will in the life of the local Church. With these sentiments and entrusting the people of the Diocese of Limerick to the maternal intercession of Mary, Mother of the Church, his Holiness willingly imparts hi Apostolic Blessing as a pledge of peace and joy in the Lord.”